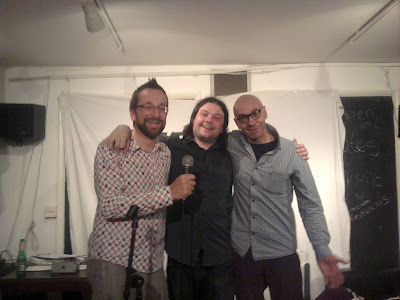 Legendary London open mic night Poetry Unplugged celebrated its 20th Anniversary last week, and to mark the occasion a huge shindig was thrown featuring some of its most memorable acts from the period.

"That's a very direct and factual establishing sentence there, Dave, though a bit overlong and bland. Now, why don't you tell us a bit more about what happened on the night?"

Erm. I can't. I fully intended to go, but unfortunately was struck down with Tonsillitis, and decided that a late night in the Poetry Cafe's cramped basement wasn't something I could handle, even under the most celebratory of circumstances. The noise of me constantly churning up pus from the back of my tonsils can't have been anything anyone would have needed to hear, either, not even as an experimental five minute "noise poem" called "Tonsil Tennis Played With A Bigger Racket Than Usual". Still, from all the accounts I've read online since it was a great night.

Despite not being there to celebrate the anniversary, there's utterly no reason whatsoever why I can't talk about why it's an important event in the poetry calendar, and why it's twenty year landmark is a heartening thing. I've talked about the night once already in the Morning Star, but short articles in left-wing newspapers and personal pieces for blogs are two entirely different things with very different rules attached, and I can actually reminisce about my personal connection with the place hopefully without being boring.

I was actually something of a latecomer to Unplugged. For exceptionally naive reasons, I'd decided that the Poetry Cafe was an awful venue filled with deeply unfriendly nights after one bad experience I'd had there in its earliest days (Don't ask me the name of the event or the person who ran it, gossip-hunter - it's far too long ago for me to recall those details now. In fact, I can barely remember why I was so put out.) This was childish and simplistic of me, a bit like turning up to a bad gig at the Brixton Academy and then blaming it on the venue itself, but in my defence, you have to remember that the poetry circuit in London wasn't necessarily all-embracing in those days. If I'd walked out of the Poetry Cafe with the impression that all its events were essentially quite dry, academic readings with no young riff-raff to be tolerated, it might be because those frosty divides did exist in those days, and I felt that I'd been stung a few too many times. They still exist to an extent now, of course - and some young spoken word artists on the circuit have erected walls and barriers of their own, complicating matters further - but the circuit in general is more liberal and accepting than it was.

In the end, I was persuaded by a well-meaning acquaintance on the circuit to give Unplugged a go, and at some point in the year 2000 I wandered down the Poetry Cafe's basement steps into a small room jammed with people. The evening was run by John Citizen in those days, who had a reputation for running a tight ship in an eerily laidback way, as if he'd mastered the art of two contradictory states of being at once, a zen-like watcher of the clock and the reading list. I recall nothing of the acts who went on before me (and I doubt any Unplugged debutante ever does) because I spent the best part of 30 minutes worrying about the sheer volume of people, all seemingly from different backgrounds, with different expectations about poetry and different ideas. And such noisy bastards, too - they cheered at poems they particularly enjoyed, roared encouragement at newcomers, and in general made the place seem like a night out, not a test pad for new poetry.

If this sounds equally naive and you're spluttering to yourself, thinking "Don't be silly, the Poetry Cafe is a tiny venue, not the Hippodrome!" - again, context is everything. Most non-professional poetry nights on the circuit in those days, especially open mics, were lucky to get twenty people through the door. And it would usually be twenty quiet people in a slightly large upstairs pub room, not crammed into a small basement area. This felt new to me.

When the moment came when John Citizen announced my name, I rushed to the stage nervously and over-enthusiastically, and accidentally stomped on his foot. He howled out in pain, and my first words on mic at the Poetry Cafe - ever - were "Er shit, I've just trod on his foot. Sorry, John!" A new catchphrase was not born that night. Nobody laughed at me, which made the situation a bit worse. I suspected that instead, they might be dying inside on my behalf.

I rushed through my set at what felt like a breakneck pace, did the one poem I had I was genuinely sure of, and to my amazement got encouraging applause and cheers. I honestly doubt this was because my performance was genuinely good - I doubt it was even tepid, to be honest - but the audience seemed motivated to push me along because they'd not seen me there before, and they knew I'd got off to an awkward start, and somehow pulled through the mess. There was a camaraderie at the night I hadn't witnessed on the rest of the open mic circuit, and while it wasn't an explicit rule (I don't recall John Citizen telling everyone to give new readers big cheers back in those days, as the present host Niall O'Sullivan does as a matter of course) I get the impression that this attitude had already woven itself into the fabric of the night. From that point forward, I was back frequently, and I was never as nervous again.

I've since met and made some of my longest-standing friends at Unplugged, as well as being offered my first proper poetry gigs through promoters who happened to be there flyering for their night. Back in those days, they would engage in a sly bit of talent-spotting as well as engaging in promotional activity, giving Unplugged an additional purpose as a place people may earn paid ten-minute slots elsewhere. This element of Unplugged has fallen by the wayside in recent years, with only John Paul O'Neill still attending on a regular basis working out who to encourage. This is, to say the least, a deep shame, but let's leave the point to rest for now and have the argument another day.

I'm not necessarily claiming that without Unplugged I wouldn't have made these friends nor been offered those opportunities, but it would probably have taken me a lot longer. And on top of that, the fact that the night is in Central London at a specialist poetry venue means that it's the true hub of the circuit, the central drinking fountain - all poetry life is here, from dub poets to slam winners to Creative Writing students to self-confessed oddballs. While most poetry open mics tend to become clubs for like-minded writers and people, acting as extensions of the host's personality, Unplugged has always been far more unpredictable, and embracing of that unpredictability.

There are some (though not many) people who don't like Unplugged and seldom go, but what's interesting is that their criticisms are often sitting on opposite sides of the spectrum. I've heard the insult "Too orderly, not anarchic enough" before now (usually from hipsters angry that they couldn't read for ten minutes). But then I've also heard the insult "It's too rowdy". This is proof that when you're trying to satisfy a diverse audience, someone somewhere will still feel left out despite all your best efforts. Others have made the mistake of attending while believing that every performer must be above a certain standard, which is a rum expectation to have of any open mic.

The hosts have all had a tricky balancing act to carry out in the last twenty years, and have all handled the situation in different but equally successful ways. Citizen, as we've established, was a walking Little Book of Calm and a genuine comforting presence to new poets. Before he was famous, ex-Unplugged urchin Pete Doherty harboured ambitions to take over his reign, but sanity (and chart success) prevailed and Carl Dhiman stepped up to the ranks, often being gently sardonic to regulars in the process but a considerate and incredibly encouraging man towards new readers. O'Sullivan has sat on Unplugged's throne for the longest time of all of them, and manages to be entertaining and gregarious while still proving to the newcomers that he's interested in their ideas, ensuring they get maximum audience support and encouragement.

For me, it's a fantastic testing ground for new material (even after all these years) where I can get a firm impression of how a poem might sound in a lively venue. I still get to meet some interesting people. And I occasionally get the odd person asking me "Are you new? That was quite promising", which always brings me down to Earth with a bump irrespective of what other compliments I've had that month.

I'm glad it's twenty. Even if that makes me feel incredibly fucking old.