A Dog On Its Hind Legs 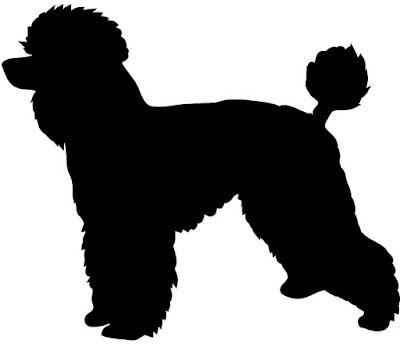 Of course, we’d both always wanted a dog. We’d discussed the issue many times over, weighing up the pros and cons, zig-zagging around the complexities of canine care. Who would look after the mutt whilst both of us were at work during the day? Would it be fair on the creature to be locked in a small flat in London? Did we really want to make compromises to our lifestyle, always having to put a quadruped first?

These are questions every serious dog owner should ask themselves before committing to their new role, and I’m sure you’ll have seen the numerous campaigning leaflets for yourself – “A Dog Is For Life, Not Just For Christmas”, “Dogs Are Animals, Not Fashion Statements”, “Dogs Die in Hot Cars”, that kind of thing. I was still in the process of quizzing myself over the muddiness of my desire to have a new friend versus the practicalities, when Claire came home one Saturday afternoon with a large black Standard Poodle.

“Surprise!” she declared loudly as she walked through the door with the soft metal haired creature, an eighties salon on legs. It regarded me with what seemed like a mixture of affected nonchalance and dismay, like a rocker sibling observing his skinny, short-haired liberal brother.

“We hadn’t discussed this properly yet!” I said, but she simply waved her hand at me dismissively, as if she’d had enough of that particular subject, then replied “His name is Geoffrey”.

“Geoffrey?” I shouted. “But Geoffrey isn’t a dog’s name! It’s the name of Tory MPs, or children’s presenters, or ageing Yorkshire cricketers! Dogs should not be called Geoffrey!”

“Well, that’s what they told me his name was at the rescue centre, and that’s what he answers to,” she replied, and the two of them walked off and barely acknowledged me for the rest of the afternoon.

In fact, if Geoffrey did indeed answer to his ridiculous name, he certainly never did it when I called him that day. It was almost as if I wasn’t a presence in the flat so far as the hound was concerned – he never once looked at me, nor acknowledged my entrance into the room. If this was what the glory of companionship with a mutt was supposed to be all about, I wasn’t feeling the satisfied glow at all. I was beginning to wish we’d bought a cat.

Two nights later, after two full days of being ignored by Geoffrey, I was woken up in the middle of the night by what I thought was the light in the spare room flicking on and off. I sleepily poured myself out of bed to investigate, and saw only Geoffrey stood by the spare room door, glaring at me. There was no other human presence to be seen.

“Is there someone else in the flat, Geoffrey?” I asked, almost expecting him to answer, but he trotted off doggishly to the kitchen, and returned to his bed-basket. It was then that it occurred to me that he must have used the light-switch himself.

I told Claire about this incident the next morning.

“Don’t be ridiculous,” she laughed. “You’ve just been dreaming. He’s not tall enough to turn the lights on and off even if he stands on his hind legs.”

“He could have jumped up and switched them on,” I answered, but she just told me to stop being “silly”.

My suspicions about him continued over the coming days. Many of my possessions had been moved around the flat, some placed on different shelves, some with the tell-tale marks of pawprints or toothmarks. It was almost as if Geoffrey was expressing his dissatisfaction with my reading materials, hobbies and interests by dumping them precariously in unsuitable places. Some even smelt suspiciously of urine. I tried to raise these concerns with Claire, but they were greeted with the usual incredulity.

As you can imagine, then, it perhaps wasn’t as much of a surprise to me as it should have been when I walked into the kitchen yesterday to find Geoffrey stood on his hind legs, as bold as you please, frying up some eggs over the stove for breakfast. LBC Radio was also switched on, but in fairness I don’t know if he had chosen to listen to that station of his own volition or Claire had left it on before heading out. He didn’t even acknowledge my entrance into the room, not even to turn around from his activity to gauge my reaction. To all intents and purposes, it was as if I were of the lowest significance in the dog’s priorities. Whilst the eggs sizzled, he gently rocked the pan backwards and forwards with his front left paw. He looked more like a relative of Brian May’s than a dog.

“What do you think you’re doing?” I commanded Geoffrey, deciding there and then that using the stove surely had to be off the map in terms of what an owner should or should not allow a dog to do. But once again, Geoffrey failed to acknowledge me and I was stunned into silence, and could only watch as he waited for the pan to cool, and then licked the eggs straight off it.

“I don’t think dogs are supposed to eat eggs anyway, it’s bad for their bowels,” I said to him, but he was clearly too busy enjoying the results of his kitchen labour to comment.

While contemplating whether I should phone somebody to sort this ridiculous situation out – although I was a bit stumped to think of exactly who – I also noticed that various slices of Battenburg cake – my Battenburg cake – had been put on to saucers and strategically placed in the corners of the kitchen.

“What the hell have you done with my cake?” I asked the dog furiously, and at that very moment, a mouse scuttled out from under the fridge, took a nibble of the cake, and Geoffrey immediately pounced with the speed of a whippet half his size and clutched the creature in his jaws. Once the rodent’s neck was broken, he let it hang limply in his mouth, and for the first time ever, he looked at me. It wasn’t the loving, compassionate look a dog should give his owner, complete with wagging tail, but a cold, superior look, the look a bear trainer gives to the animal he forces to dance.

Geoffrey did not say a word – he never has done, for all his intelligence he clearly doesn’t think speech is worth the effort – but from his look I seemed to comprehend a clear message.

“Look at you,” he sneered, almost as if he had actually verbalized the phrase. “Who do you think you are, talking to me like that? For months your flat has had these mice, and you’ve never been able to get rid of them, you bumbling piece of airy, pink flesh with your music and your useless, decaying books. You haven’t known the creature’s habits, but I’ve made the effort to watch them come and go. That’s why I cut up your stupid cake and placed it strategically around the kitchen.

“And don’t you ever, ever, order me around again. I tell you, I won’t stand for it. How do you think it feels for me, having an owner like you? You might think I have the hair of the guitarist out of Queen, and need to get myself groomed in poncey boutiques, but you spend money on clothes and still look like some try-hard jerk. At least I can only ever be a dog, and I tell you, I’m bloody proud of that much”.

Once this glare-message appeared to have finished, he dropped the mouse where he stood, then trotted off into another room, leaving me to think about what had just happened. I hadn’t had the chance to absorb very much when Claire came home again and reprimanded me for eating eggs without properly cleaning the frying pan afterwards. I felt it pointless to explain the facts behind the situation.

I suspect I may not be long for this world. Geoffrey has other plans for me. Books about murder have moved their way mysteriously to the front of the bookshelf. The axe from the attic appeared in the hallway recently. And many times, when nobody has been looking, Geoffrey has bared his teeth at me in a manner which could be a hint of things to come. Claire never notices. So far as she is concerned, he seems to take priority in the household these days.

More than once at night he’s come into the bedroom and sniffed my testicles, and made mouth-gestures as if he’s about to bite them off. Next time, if I don’t wake up and notice him there, I believe it may well happen for real. Reader, if I am ever found dead, please take this note seriously, and examine the evidence on the basis of what I’ve just told you. I realize it will be an unusual case, but there may be other similar ones to come in these strange upside down times, where dogs are walking on their hind legs behind our backs.
Posted by 23 Daves at 12:41 No comments: